Bill Gates is a believer in the future of cryptocurrencies. He’s spoken out on the topic on many occasions and also the fact that Microsoft accepts Bitcoin as a payment speaks volumes.

Bill Gates’ vision on banking and the financial world is idealistic; he believes that microtransactions will allow the world’s poor better access to financial systems and credit facilities. Even if problems like regulation and technological locking aren’t fully solved.

“Problem is that the fixed cost of ATMs & teller systems with the bureaucracy and systems in place now is that small transactions aren’t cost effective.There’s a need for a utility type service that let’s you pay a provider regardless if they use the same bank as you.” 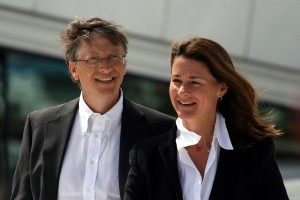 Could Bitcoin be a solution to these problems?

Gates’ response was: “Right now I don’t think that Bitcoin is ready to be used for transactions for poor people as you need to understand that there’s huge volatility in the price and you need to make sure that you choose the correct provider to prevent things like have happened to Mt. Gox for example. But that basic technology shows that digital can do these things very cheaply.”

He says that right now there are several issues – for example with governments who want to see where the money is coming from and the pseudo-anonymity might make them cautious. We would also need to get to a point when, in the case of a transaction being made in error, there would be an option to reverse that transaction and we could actually see who is behind the transactions then we could see it getting to critical mass.

Bitcoin is exciting as it can show how cheap it can be. It is better than currency as you don’t have to physically be in the same place and for large transactions currency can be very costly. Even though some people might be cautious because of its anonymity and the customer is willing to be known. With Bitcoin the technology is key, you can add to it or build a similar technology that people are comfortable with. It doesn’t have anything to do with money laundering or terrorism.

View the videos about Bill Gates on Bitcoin here:

Sir Richard Branson – The ultimate entrepreneur, adventurer, and Founder of the Virgin Group, is also a Bitcoin enthusiast. He has invested in many Bitcoin startups and also hosted the Blockchain Summit on his exceptional Necker Island earlier this year. http://www.blockchainsummit.io/

When he was asked by Bloomberg if he thinks if Bitcoin the currency that is going to work eventually, he simply responded:

“It is working and eventually there will be other currencies similar to it or maybe even better. There is a huge industry around Bitcoin. Yes, Bitcoin is very volatile but people can make money out of volatility”. He also offered a typically candid response as to why is he accepting digital currencies as payment for Virgin Galactic – “Because I’m not foolish. I’d rather if people who have a huge amount of digital currencies spend it with me than elsewhere.”

It feels strange to think of a world without cash, no more coins or notes for us to find down the back of the sofa, but it appears that’s the way things are heading. Through making investments in the likes of Square and Blockchain, I hope to be a part of what could be a democratisation that helps to put more power and control back into the hands of the everyday citizen. http://www.virgin.com/richard-branson/how-digital-currency-could-transform-the-world

We at HitBTC are also true believers in cryptocurrencies and are working hard to see the industry thrive. Join the revolution with us!