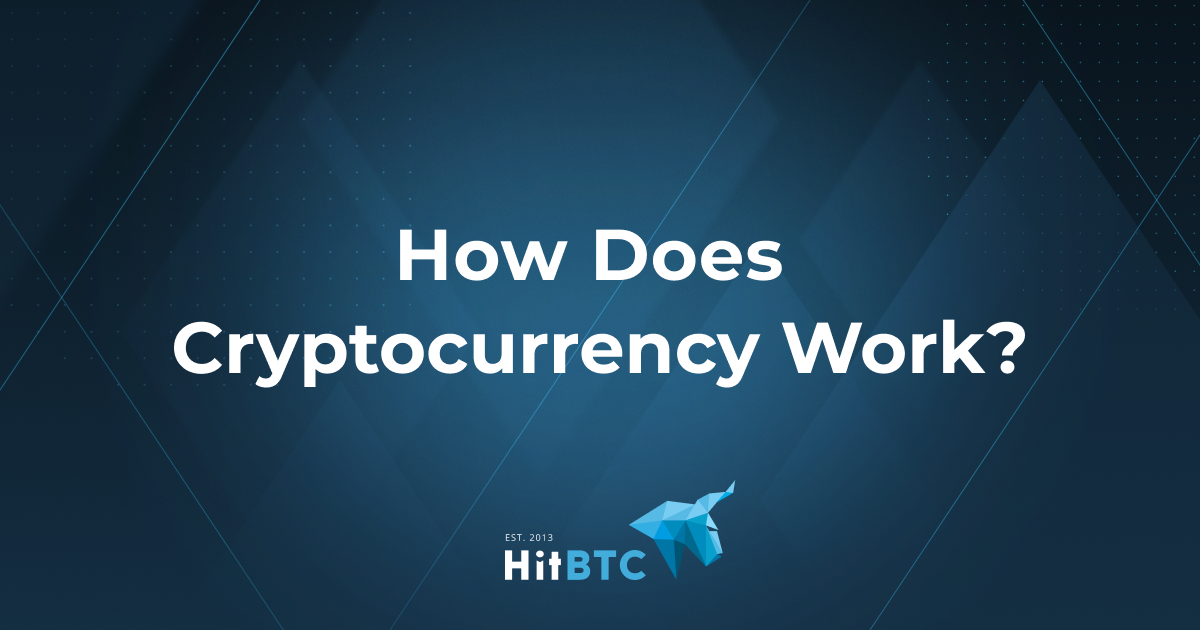 Cryptocurrency is a digital asset designed to work as a payment mechanism in much the same way as regular money. Cryptocurrency is based on the technology of blockchain – a distributed public ledger, in which all transaction records are stored. The combination of encryption and blockchain makes it immutable and decentralized. If you ever wondered about how does cryptocurrency work, this article presents you with explanations of the basic principles behind the technology and clarifies how and why it differs from other types of money.

Even people that are far removed from the world of cryptocurrencies must’ve occasionally encountered mentions of such things as bitcoin, crypto wallet, coin, crypto exchange, mining, etc. In this little write-up, we will give you a brief overview of the main concepts and terms of the trade.

To use cryptocurrency, you don’t need to be an expert in the advanced mechanics and algorithms behind them – after all, when you go to your bank and use your debit card, you don’t have to have a deep knowledge of the global financial system. However, it is very useful to understand such concepts as digital currency, blockchain, and cryptography.

The comparison we just made between cryptocurrencies and banks is not as far-fetched as you might think: in both scenarios, these are intricate systems in which assets circulate, transactions and balances are recorded to enable people and businesses to send or receive payments electronically, online. There is, however, a significant difference between regular, fiat money and cryptocurrencies, and it is that central banks and governments issue regular money, while cryptocurrencies may be released by private parties, without centralized backing.

All cryptocurrencies are based on highly sophisticated mathematics and computer programming techniques, and thanks to that, they are difficult to hack or forge. The protocols used in cryptocurrencies also disguise the personal information of their users, and as the result, the transactions and money movements are not linked to users’ identities and are hard to trace.

Users can send and receive cryptocurrencies directly, peer-to-peer, and all transactions are logged in a digital public ledger (a system known as “blockchain” – a chain of blocks distributed on users’ computers all over the globe). All records are cryptographically-encrypted (hence, the “crypto” in “cryptocurrency”). The system is decentralized: no banks or central governments are involved, and users and computer algorithms control all operations. In addition to being sent and received by users directly, cryptocurrencies can also be traded on cryptocurrency exchanges, which operate similarly to stock exchanges.

Cryptocurrencies are a relatively new invention. Although many attempts to create digital currencies have been made since the early 1980s, it was not until 2009 that the first true, encrypted cryptocurrency Bitcoin has been developed by a certain Satoshi Nakamoto – a name many believe to be assumed. Today, Bitcoin (denoted by the symbol BTC) remains the dominant cryptocurrency on the global cryptocurrency market, although there are hundreds of smaller cryptocurrencies out there, with new ones being released all the time. All cryptocurrencies, other than Bitcoin, are called “altcoins.” Some of the common altcoins are:
· Ethereum (ETH);
· Ripple (XRP);
· Litecoin (LTC);
· Tether (USDT); and
· Bitcoin Cash (BCH).

As we mentioned above, all transactions involving cryptocurrency are recorded in a public ledger, much like the system banks use to track banking operations. Unlike banks, however, in a blockchain ledger, transactions are mostly open, which ensures their transparency. Knowing that every transaction is visible guarantees that users play by the rules and that balances are carefully tracked to avoid spending more than is actually available.

The ledger looks like a list of database entries that cannot be modified unless specific conditions are met. The blockchain ledger belongs to no one: various bits and pieces are spread between users’ computers globally, making it decentralized. Anyone can log in and check the status of the system at any given time. This makes the system immutable.

Blockchain Transaction Verification: How It Works

Let’s look a bit closer at what we’ve briefly touched upon above. Here’s how it actually works.

1. A blockchain is a type of log or database in which information about transactions is entered;
2. Every transaction generates a hash;
3. A hash looks like a string of letters and numbers;
4. Transactions appear on the ledger in chronological order, and this has crucial importance;
5. The hash does not depend only on the transaction itself but also on the hash of the previous transaction;
6. Every microscopic change that occurs in a transaction creates an entirely new hash;
7. The so-called nodes (computers on which bits and pieces of the ledger are hosted) inspect the hash to verify that a transaction has not been changed;
8. If a majority of the nodes agree (reach “consensus”) that the transaction is genuine, it gets approved and written into a block;
9. Each block contains a reference to the previous block, so together they form the blockchain;
10. As the blockchain is spread over many nodes, each of which has a complete copy of the record, it would be virtually impossible to falsify the records;
11. The state of the blockchain is automatically updated, and the update (block) time depends on the specific currency’s network;
12. And as the nodes are spread out all over the world, it is essentially impossible for a single party to hijack or tamper with the entire network.

The term “mining” refers to the process of verifying transactions and adding them to the decentralized blockchain. The word “miner” has two meanings in the cryptocurrency industry:
a) A node (a computer) on any given blockchain that “manufactures” blocks by solving complex mathematical problems known as “proof of work”; and
b) A person who owns the node with whose computing capacity the calculations are performed. The equipment owners usually receive a reward in cryptocurrency as their miners produce a block about which the nodes reach the consensus. The reward per block currently stands at 6.25 BTC – or just half of what it was in late 2017.
c) In addition to the proof of work, there’s an alternative method for validating the transactions and achieving consensus called “proof of stake”. The validators support the ecosystem by locking up a certain portion of their assets as a stake in the blockchain. Once this is done, the participants wager on which blocks may be added to the chain next. When the block they betted on does get added, the validators receive a block reward proportionate to their stake.

We have touched on several important qualities and functions of cryptocurrency. Let’s look again at how cryptocurrency differs from regular, fiat money. It is:
1. virtual, with no physical representation in the 3D world;
2. decentralized, i.e., in most cases, not backed by any government, and is truly global;
3. encrypted, which makes it immune to hacking or tampering;
4. virtually anonymous if that is what the users wish;
5. open-source;
6. requires the use of computer power to solve proof of work challenge or acquire proof of stake and generate coins;
7. can be used peer-to-peer, without the involvement of any intermediary banks; and
8. Depending on the blockchain, transactions take seconds or minutes, unlike some bank transfers.

We hope that our explanations have made things a bit clearer for you. But if you’re still feeling uncertain, don’t be anxious: these concepts are not intuitively clear to most beginners. Just keep reading about it – or better yet, try your hand in a little crypto trading. Our support center contains many useful guides that will help you get started. Trading is engaging, exciting, and can even be lucrative. Moreover, cryptocurrencies are not going anywhere – we believe that they have an essential role to play in our shared global future. Numerous experts think that cryptocurrencies will provide safe financial heaven for many in the rapidly shifting world economy. So we encourage you to learn more and join in the mass adoption trend that we are witnessing.