The big news, which even made it into the New York Times was the big sell wall of around 30K bitcoin that were responsible for driving down the price. The hunt was on to find this mystery seller and whether it would one day be public knowledge or not, the big question now is: Do we need to do anything about Bitcoin Manipulation?

This was a very unfortunate situation and it shows the infancy of this ecosystem as a single party can have such an influence and the fact that trading in general can really control the price moves. One day as Bitcoin spreads across the Globe this would be a lot harder to achieve by a private party just like today only a central bank can move the price of the Euro or the Yen. Perhaps in the future no single party would be able to do something like this again, but for now all we can do is be wise about our Bitcoin investments and try not to lose sight of the fact that what makes Bitcoin great is its free market status.

Many now think that we have bottomed for the year, we created a new low and the bounce was pretty strong with nice volume.  However, it is way too early to assume the price has turned.  Just like we have been bearish consistently for the last month or so, we still need the price to prove to us that the corner has turned.  In the mean-time, resistance continues to pile up.  If the price has turned it would need to start taking them out one by one.  For now we need to clear the first level of resistance currently sitting at $340 which was our downward target last week.  The odds favor that this should be broken to the upside and perhaps we can still see the $400 mark expected last week sometime in the near future.  What is still a minor concern is that the price rebounded a little higher than expected at $275 and not $260-265 zone.  This area could still be tested and perhaps be a good thing before a stronger reversal. 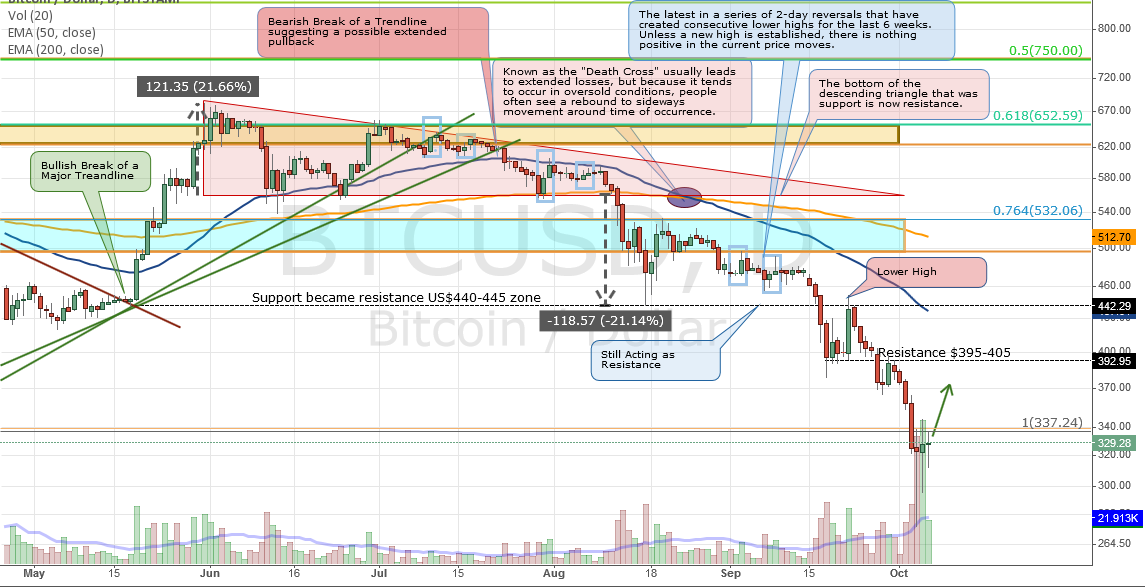 Looking at an intraday chart we can see that our trusted RSI has finally let us down as the price reversed before reaching the overbought territory of 70. Then it let us down again when it indicated clear divergence with the price when it hit the oversold area for the second time later in the week. It has really been a while since we hit the overbought area and that is the expectation over the next week.  The RSI has been a good indicator, so just because it did not do its job last week, does not mean it has been rendered useless.  Look for the continuation of buying off this bounce and perhaps the price can reach $380-$400 on this strong rebound. 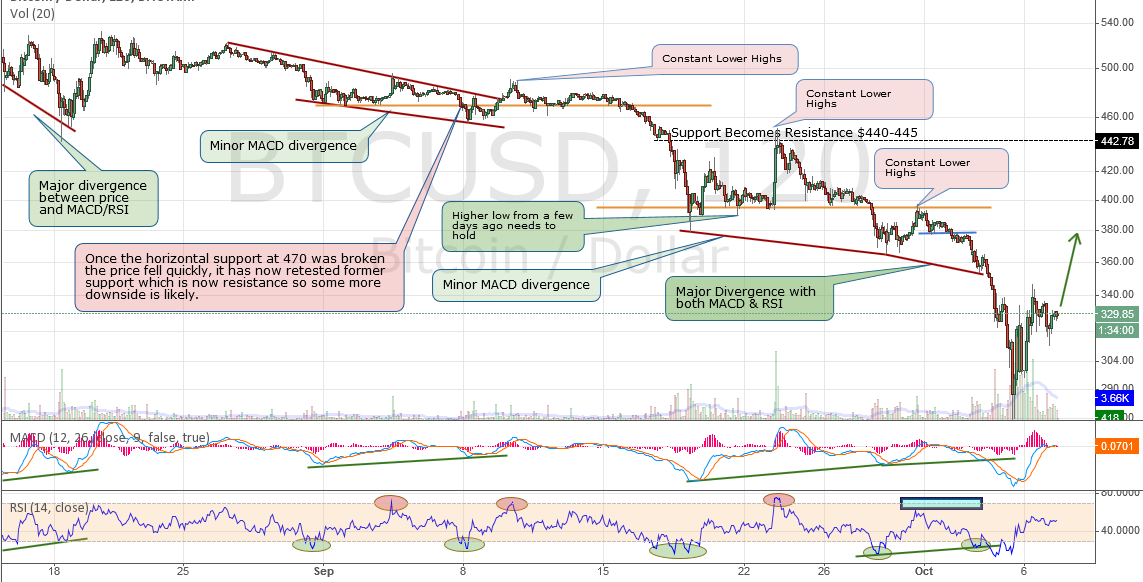 The strong rebound can certainly continue for a bit with momentum, it is too early to say that the yearly low was hit over the weekend so let’s give it some time.  In the meantime look for more buying once we finally break back above $340.  Hopefully it can go up to $380-400 at which stage we would re-evaluate the situation. Keep an eye on the RSI which was the perfect predictor all through September so perhaps it can regain that status.  This morning’s low was around $305 so as long as the price can hold this level, we would put our bearish views on hold for the time being.