In last week’s update we were expecting for this week to show us a higher low and a higher high in order to answer the question whether $275 low is here to stay. The values theorized like a pull back to $340 did not perfectly materialized but the overall trend was nailed on the money.  We had consolidation in the $350’s a higher high at $415 then a pull back low to $370 and are now sitting right at $380-400 area just below resistance getting ready for another breakout.

For the time being we are expecting the $275 low to stick around for a while and this week’s news events have not scared anyone. Perhaps there was an unexpected catalyst the last few weeks in the form of the drops in the Stock Market giving some people thoughts of diversification.  The one thing Bitcoin is good at is keeping people in it’s ecosystem so once someone buys their first statoshi, they are hooked and no amount of exchanges running away with bitcoins will change that mind set. People need to learn that you should only trust others with your private keys in amounts you are willing to lose or have stolen. The news from JP Morgan Chase CEO is also a good sign that Bitcoin is no longer to be ignored even by those who have more money than the entire Market Cap of Bitcoin’s value just sitting around collecting dust.

We are sitting at a very similar point in time to last week but now we are coming off a low instead of looking for one.  This drastically improves the chances of seeing new highs above $440 in the near future. All that has to happen is a break over the $390-400 zone. If that breaks as expected, we are expecting new buyers to step in out of fear of missing the next big rally in Bitcoin. There will probably bee a pull back taking the price down from $450 to 400 but it should be used as a buying opportunity. Bitcoin still has a lot of issues to work out but at the moment the trend is your friend and expecting $500 over the next 3-4 weeks is a good possibility. 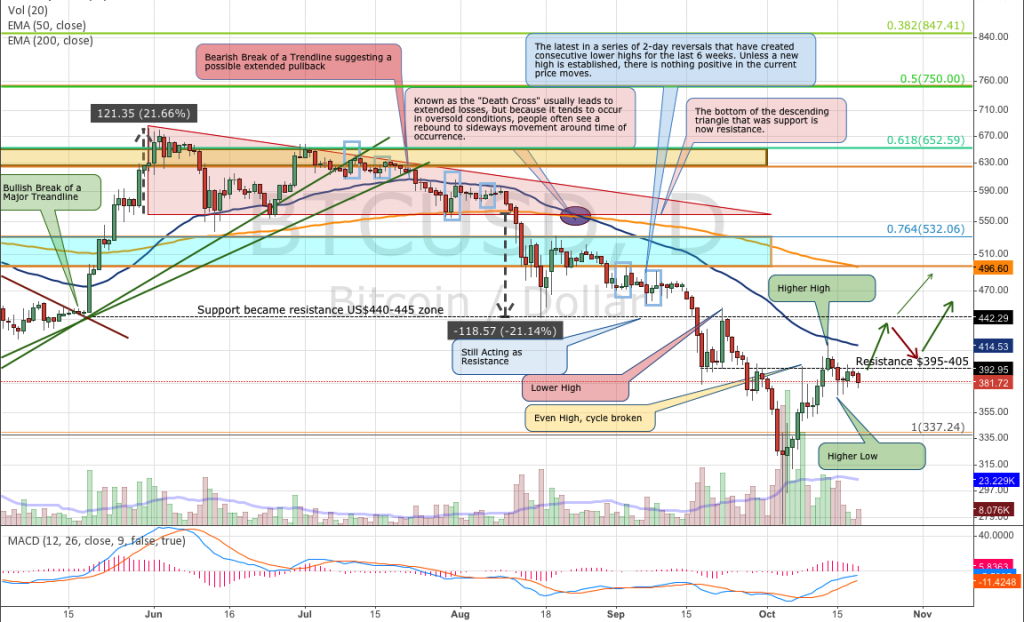 Taking it one week at a time, we are perfectly aligned for another breakout past $400 to new highs for the month. $440-450 is critical resistance and will be hard to break, don’t expect miracles over night. We have a long way to go before we see $1,000 again so let’s review one new high and low at a time while keeping a close eye on our RSI which has not had an oversold signal in quite some time. Some will consider this ultra bullish while other see it as a reason for some short-term pain to strengthen the bullish case. 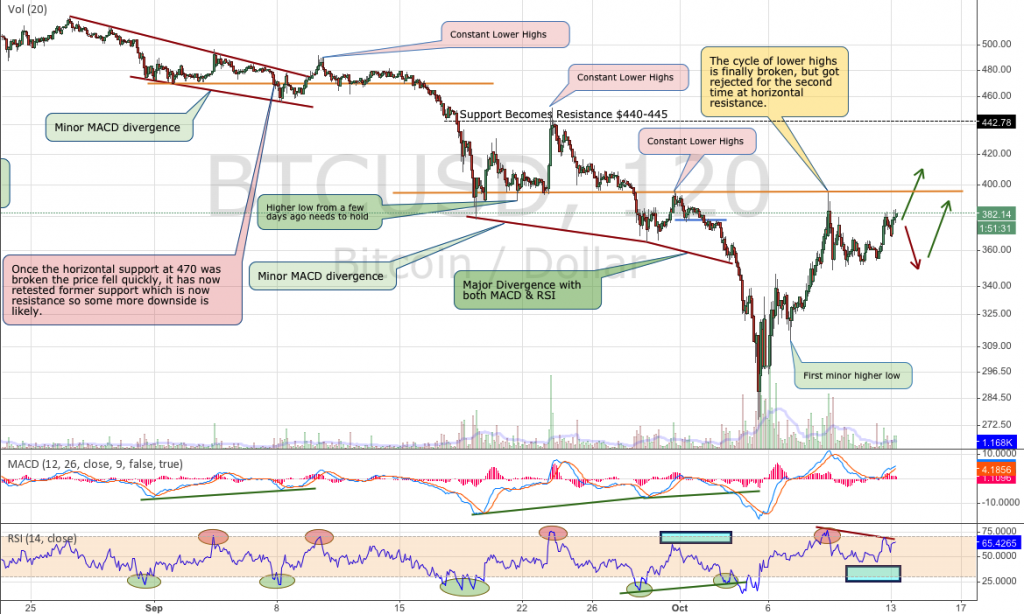 At the moment the price looks ready to breakout to new highs.  Of course anything can happen an hour after you read this but all signs point to imminent new highs in the $440-450 range.  After that there should be some consolidation or a pull back to work off the overbought conditions that will develop.