Last Week’s call for Bitcoin to continue on its Bullish path was probably made at the worst possible time. Everything was in place for the $370-375 zone to be the perfect level of support and we had bounced from that level in a nice looking way. It now looks like the support has been established in the $340 area so as long as we can hold that, we can still reach our targets mentioned last week in the near future.

It is starting to get a little discouraging for people on the street about Bitcoin and especially it’s price. Yes there are plenty of people that are still trying to make something from all these start-ups especially in the 2.0 space, but the game is becoming for those with large VC funding and traders that have been moving the market lately. To those that might say there was genuine demand for bitcoins earlier this month driving the price from $370 all the way to $450, it is easily disproven with the fact that it was trading for half the week at prices under that.

On the news front the most important statement came out of the CFTC which is giving all the hints that they will classify Bitcoin as a commodity in the near future so that they can regulate the exchanges. It will all be done under the pretense that the price volatility needs to be controlled and consumers are getting hurt. This could create an additional level of complexity and once again placing the United States in a position for a competitive disadvantage. There will never be a direct cause and affect as to why Bitcoin is growing so slowly, but making something that is not straight forward more complex will definitely slow adoption.

The sale of 50,000 bitcoins by the US Marshals from the original Silk Road confiscation will be up for auction. It would be nice to see them leave authority’s hands and if it’s another long term buyer it will definitely be good for the community and the price should not really be affected.

The descending triangle that has just formed is a very troubling sign. It is suggesting that we could fall as far as $290 and these triangles are right about 70% of the time on hitting their targets quickly as the previous two did. It does look like the low $340’s have created a nice reversal and since we have fallen far enough under the 50-Day Moving average, it has once again become resistance so we will know today if we can break out above and continue to new highs or it is back down we go to test the recent lows at $340. If $340 does happen to break to the downside we should hit $300 quickly. 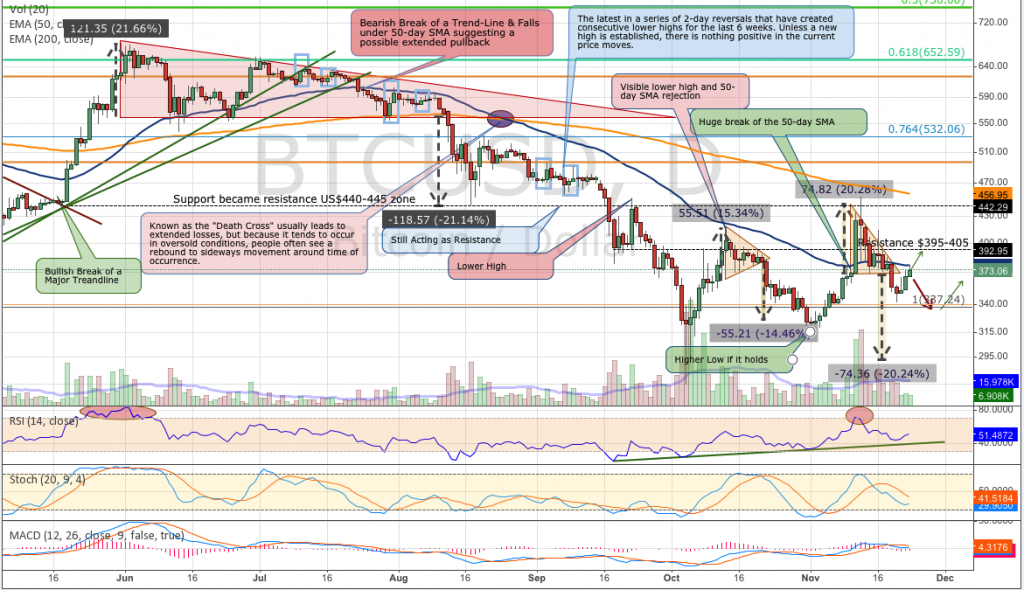 The hourly chart is also sitting right at resistance but in this case it’s the 200 SMA that has caused it to pause this morning. The RSI has made it to overbought levels and it would be nice to see it take a little break at least down to the 50 SMA before attempting a run at $400 once again. 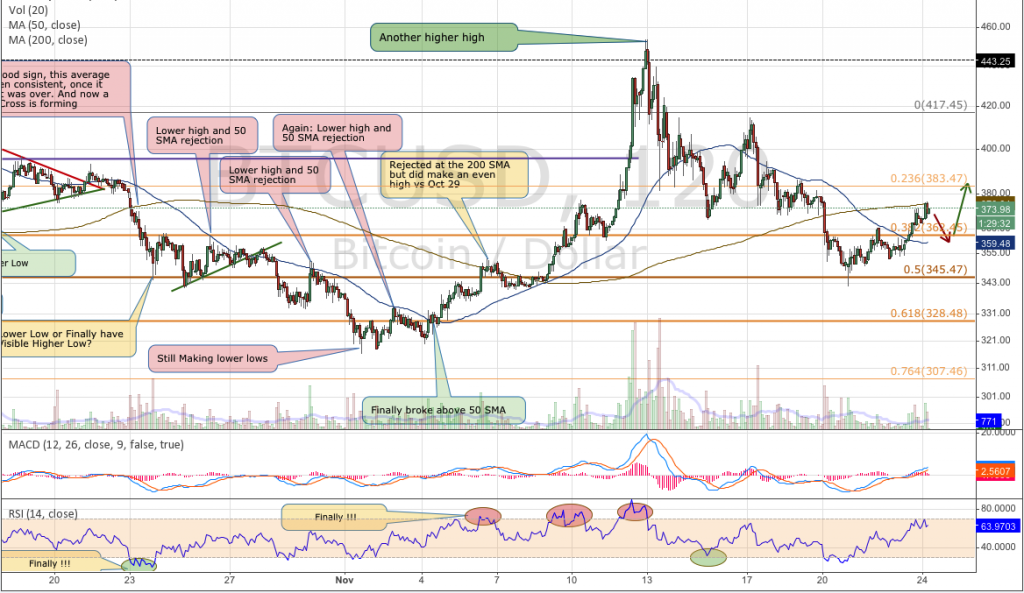 We remain slightly bullish overall and expect to see $400 hit this week, however at this exact moment it would be ideal for the price to take a little break and sell off into the high 350’s before resuming the run up to work off the slightly overbought conditions and SMA resistance. In a disastrous case of falling below $340, we would consider the target indicated by the descending trying and will turn bearish short term looking for $300.