In the last overview we were slightly bullish though were looking for a pull back into the $350 area. That move finally arrived after virtually 0 volatility for over two weeks. There were a lot of news events during that time, but what everyone is talking about today seems to be the price that Bitcoin Investment Trust paid to win the 48,000 bitcoins at the auction. Chances are, they got them at a premium to the exchange price though probably not as much as most think. One of the reasons why most want to know is that it might create a more realistic base price for a short period of time. It’s the same reason why small investors listen to Warren Buffet even though there is nothing that he does in his investments that remotely apply to 99.9% of traders or investors.

In other news, it looks like there will be a nice year end for many up and coming Bitcoin companies as more and more VC’s are looking to still get in on the 2014 record year. By we should have officially beaten 1995 Internet sums even if we are ignoring inflation for the time being. ChangeTip was the big beneficiary, as they are getting more and more popular among twitter users. As long as the Mining structure is sound this trend should continue into next year, though something to keep an eye on is the fact that for the first time in 2 years the difficulty has dropped as some miners have shut down their machines due to the continuation of depressed prices.

In the regulation news, there are positives and negatives. Companies like MasterCard have come out publicly against crypto currencies, which is fitting for any industry that know it will not be able to compete going forward. This is actually a great sign for Bitcoin and is the better case scenario than companies like that looking to adopt it and integrate it. The financial industry is definitely in need of a fresh start. No news yet on what will happen with the NYC Bitlicense proposal but Australia has made some pretty strict tax rules, which is encouraging some companies to move. History just continues to rhyme as the movement of people and capital will always attempt to find maximum freedom.

We continue to hold on to a reasonable price when looking back more than 12 months and the best option for the discouraged Bitcoin believers is just to hold out a little longer and watch the inevitable European Debt Defaults. Greece and Cyprus showed us a prequel a few years ago and we are definitely due for the full feature. It is impossible to say when, but the day banks don’t open in one of the bigger countries, Bitcoin should be the primary benefactor.

Because the price hung around the 50-day SMA for an extremely long period of time, the odds favored a breakout to at least $400 this past week, but as has been the case lately, Bitcoin does the less expected. We have now made a double bottom at just above $340 and that is our new line in the sand. If it can’t be held and prices drop below that mark, the target from the November Descending triangle is fully in play. It could have been avoided if only we stayed above the triangle’s base but now even the 50-day SMA is once again starting to turn down. If the price does not reverse immediately we are looking at a target of $290-300 and that is a very critical area that can either bring on massive buying like we saw in early October or panic selling from those that bought at that time and will be looking to get out with whatever profits they can. Logic calls for the latter but we will have to re-evaluate when the time comes. 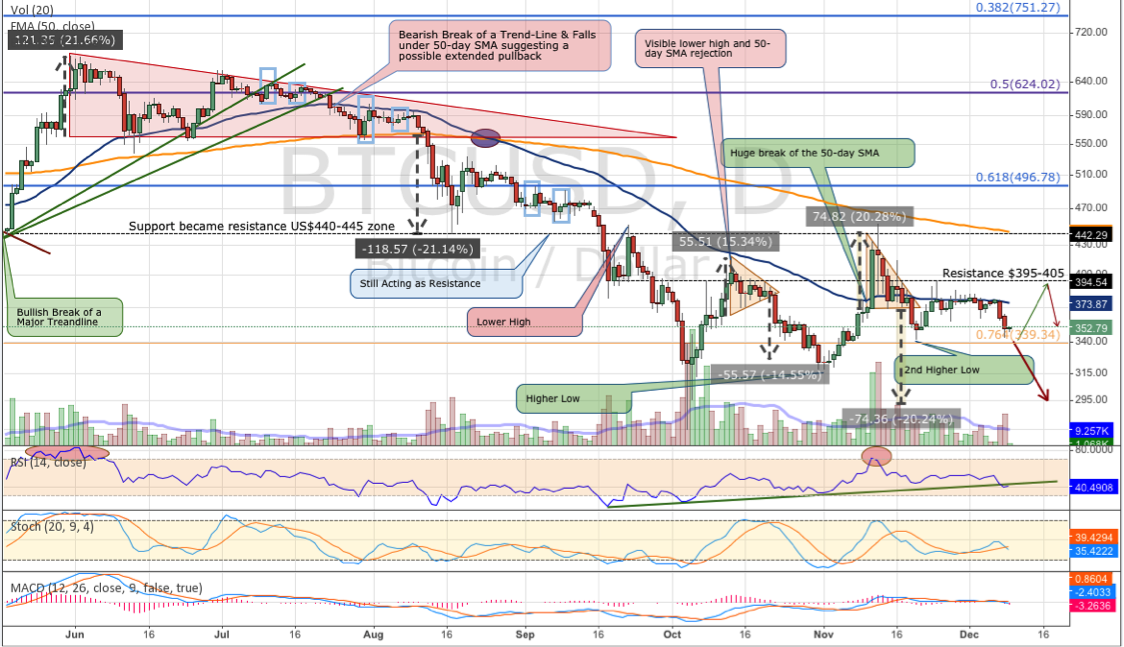 The short-term chart is suggesting a slight bounce right here, but this chart is not looking too hot either. The moving averages have crossed to the downside and we have broken the bullish tre nd line and in textbook fashion, retested it from bellow turning it into resistance. The RSI is suggesting we are slightly oversold and we have fallen pretty far below the 50 period moving average so a small bounce here is definitely possible. 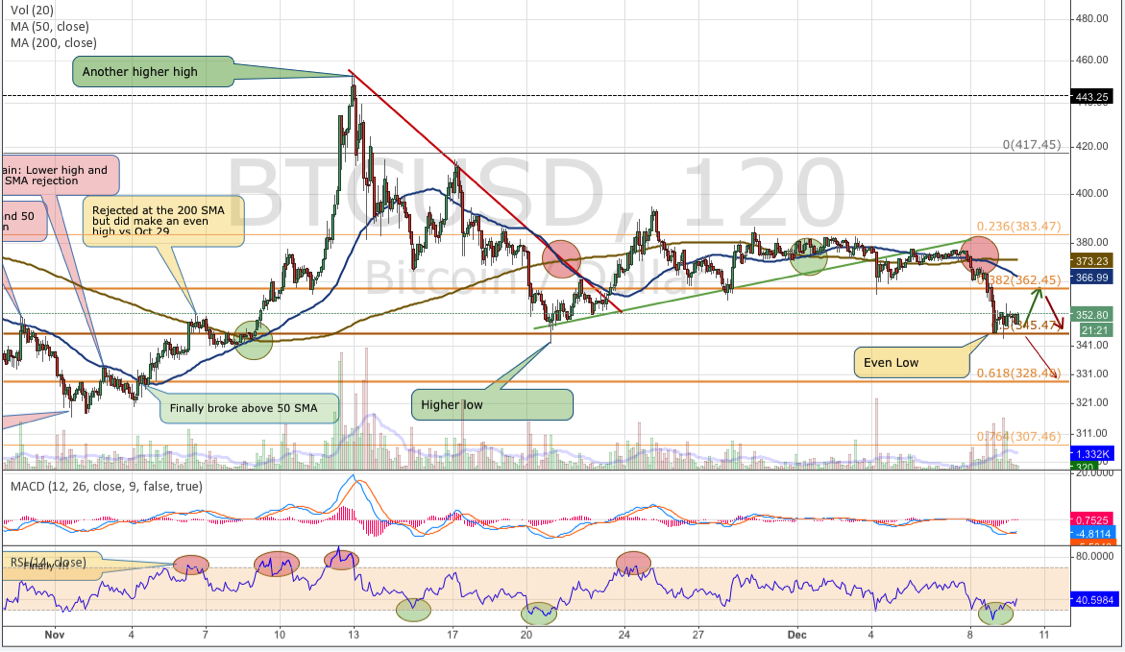 We have to turn slightly bearish though do acknowledge the possibility of a holiday season where bitcoin believers might go out and buy a bunch of bitcoins to use as presents to fulfill the stereotypes placed on them by friends and family. Look for a possible small bounce over the next day or two back to the breakdown levels in the low $360’s but the higher probabilities lie to the downside. If $340 is lost, prices can move quickly to the low $300’s