There has been a lot going on in the month of May this year. Some terrible natural disasters and also financially concerning events. Euro has been on a decline since the start of May as Brexit draws closer. The referendum takes place on June the 23rd. Polls are currently suggesting it could go either way, bringing with it uncertainty and pushing the Euro down with it. Why is this important to us regarding the price of Bitcoin? When we see big drops in fiat currencies, Bitcoin skyrockets. Whether Britain decides to vote in or out will make the markets move significantly. In case of Britain actually doing a brexit, I’d start collecting your coins now.

Aside from political mayhem another important reason that will keep Bitcoin climbing in the near future is the coming up of the next 210 000 blocks mined. Bitcoin will be cutting its yield from mining by 50% which means that the reward for mining decreases by half. Because of this, many miners will find mining unprofitable and quit out unless the price doesn’t do a significant jump higher. This by result will create a supply problem, pushing the current price up even further. As the demand and popularity of Bitcoin keeps rising and yet more businesses get into the field of cryptos, the price may possibly rise exponentially after the reward has been halved. You can see the countdown to the Bitcoin Reward Halving.

On May 27th the Swedish bitcoin mining company KnCMiner declared bankruptcy. The company had raised funding of $32 million from its investors since its founding back in 2013. Th company’s CEO Sam Cole blamed the bankruptcy on the upcoming halving of the bitcoin reward. Cole told Coindesk: “Effectively our cost of coin – how much we produce the coins for – will be over the market price. The price is now [roughly] $480. With all of our overhead, after July, the cost will be over $480. All of the liabilities we’ll have after that time will be too high.”

New Highs in May 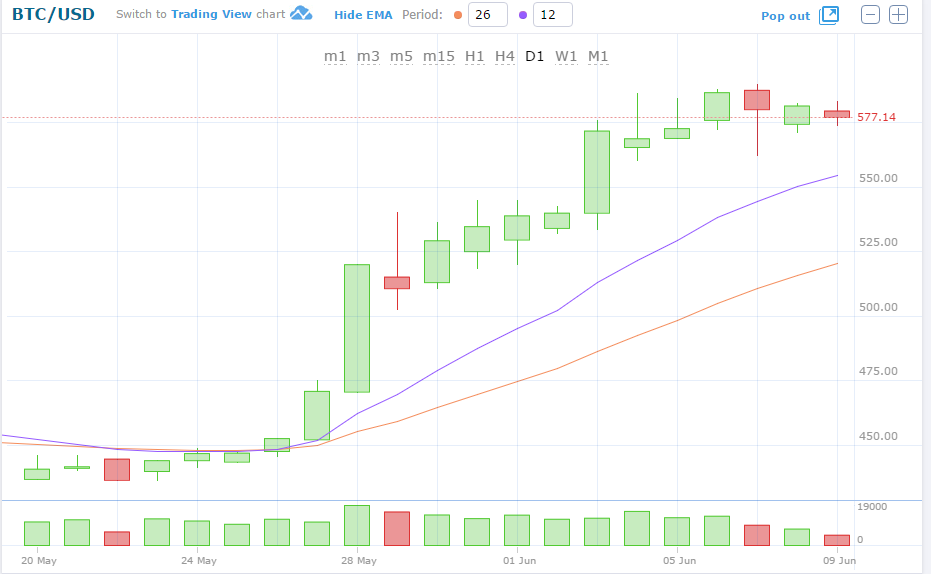 Due to the recent events in the month of May Bitcoin did a rapid climb from $460 to $530 increasing in price by a whopping 15%. It did a rapid breakthrough from the previous level of resistance at $460 climbing straight to $520 in just a few days at the end of May. The next resistance levels could be expected at $550 however with Brexit and the halving of the reward upcoming, who knows what the next stopping point for this powerful crypto is. Sky’s the limit! The last time Bitcoin’s price neared $530 was back in 2014 when after a rapid fall following the bubble the price climbed back to around $680 mark. Is this something we could be seeing again in the next few months?

To conclude – exciting times for Bitcoin are ahead of us. Could we see the price returning to over a $1000 in the next few years? It is hard to tell but in the near future, apart from a temporary bearish pullbacks, Bitcoin is showing no signs of slowing down. Keep hold of your coins or by all means get some if you already haven’t got any! Buckle your seatbelts for an interesting ride in June!

Even though I try to give you the best advice possible, please understand that the markets can be unpredictable and trading is risky. It might result in the loss of some or all your investment. Never trade with capital you can’t afford to lose.